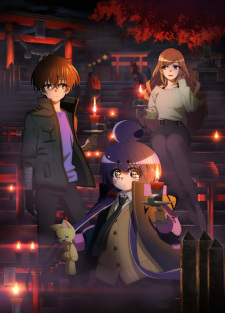 Plot Summary: Keitarou Gentouga is a college freshman who hates ghosts. Unluckily for him, he has a knack for attracting spirits. Two years ago, this connection had led to him receiving a spiritual injury on his right hand, with his friend getting caught in the crossfire. The event caused him to become a shut-in, leaving him with very poor social skills. Fortunately, Keitarou is slowly starting to mingle with society, thanks to the help of his childhood friend, Eiko Houzuki. As part of his rehabilitation, Keitarou takes on the part-time job of a private tutor, and his first pupil is none other than Eiko's cousin, Yayoi Houzuki. Besides being a child prodigy, there is another peculiarity regarding Yayoi—she has a spiritual constitution, just like Keitarou. However, in contrast to Keitarou, she yearns to encounter spirits, hoping to find the ghost that took her mother away. As Keitarou is dragged along by Yayoi and Eiko to haunted spots, his part-time job seems to be straying further and further away from its original purpose.